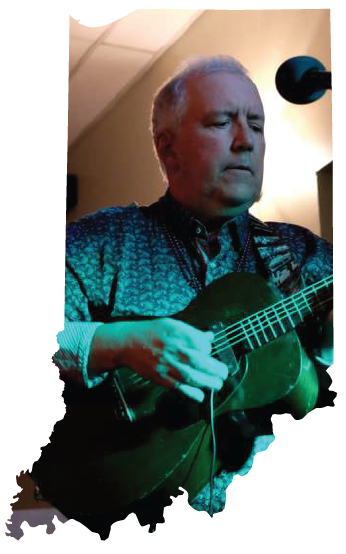 Buck Rogers Jr, Hoosier Songwriter & musician and La Louisianne band leader, delivers his passion for community, celebrating life, and coming together in good times and during times of strife to carry on through his Americana Folk music style. His songs are full of tales and stories about his life and times growing up and living in the Indiana heartland and down south in Louisiana, and also honoring those who have made the greatest sacrifice for this country. Life is full of adventure, twists and turns, ups and downs, and he shares all of those moments and more in his music.

An accomplished and experienced musician and songwriter, he performs his music throughout Central Indiana and has written hundreds of songs over the last six decades. His performance sets are a mix of solo acoustic and electric original songs and covers. Along with his solo performances, he also plays and collaborates with talented musicians from all around Indiana in bands such as the La Louisianne Band.

Recently, Buck Rogers Jr. was featured on a segment for WISH TV’s Indy Style, where he and his bandmate Bill Bailey performed at the 2021 Indiana State Fair. Watch a video of the performance. He is also deeply honored to recently have been awarded “Best of The Best” in local entertainment for 2021 in the Shelbyville News annual readers poll!

"I'd like to commend Buck Rogers Jr. on his talents and dedication. Not only to the community but, to all those patriots who protect and serve us all. His commitment to local music is only surpassed by his work to provide annual events such as our Mardi Gras Night in Shelbyville concert and his efforts to foster songwriters via his workshops. The arts community in Shelby County is enriched by Buck's efforts!"

Buck was born in Gary, Indiana and raised in Merrillville, Indiana, where he graduated high school. He later graduated from Indiana University in Bloomington and holds a Master’s in Social Work from Southern University in New Orleans, Louisiana.

Although music serves as one of his greatest passions, Buck spent the first half of his life as a dedicated social worker in the Indiana Heartland. During his career, he worked with many children and families, in vocational rehabilitation for the state government in Louisiana, and as a Licensed Clinical Social Worker (LCSW) for the US Department of Veterans Affairs homeless veteran programs.

It wasn’t until the second half of his life that he began to devote a large part of himself to music and took on the moniker “Hoosier Songwriter.” Given Buck’s family history and upbringing, as well as his various life experiences, he carries a unique perspective that he conveys in his music and songwriting.

Buck’s father, Robert Rogers and family, hailed from Ohio & Indiana and his mother Ruby and family were from New Orleans. Growing up, he and his family made annual trips from Indiana to Louisiana.

In the 80s, he resided and worked in New Orleans for a decade. Buck is fortunate to have not one home, but two, in Indiana and Louisiana.

He comes from a proud family of veterans. Buck’s father Robert W. Rogers fought in World War II and his uncle was a veteran of the Korean War, hence he holds a special place in his heart for veterans from all wars and conflicts.

Learn more about how Buck’s family history and story have  impacted his music and songwriting on the Music page.

When most people hear the name “Buck Rogers” they think of the infamous fictional sci-fi character made famous in the 40s and 50s in comics, radio, film, and television, but the name holds a much more meaningful story with Buck Rogers Jr. and the Rogers’ family.

His father, US Army Staff Sergeant Robert W. Rogers, served in World War II. While stationed in Europe, his army buddies warmly nicknamed him “Buck Rogers” after the iconic character. The name stuck with his father throughout his entire life.

In order to honor his cherished father who was part of what Tom Brokow referred to as “the Greatest Generation”, Robert Jr. (Buck) adopted the stage name Buck Rogers Jr.

Follow the Events page to stay up to date on where the Hoosier Songwriter and musician Buck Rogers Jr. will be playing next; he may be coming to a street corner, festival, bar, cafe or restaurant in a city near you!

In the latter half of his life, Buck hopes to continue making his music and spreading his message to a broader audience. He currently records music and streams live concerts at Playground Productions Studio in Indianapolis, and looks forward to releasing new music.

In the words of his father, the late, great Robert W. “Buck” Rogers, “It is not where you have been, it is where you are going.”

Buck is honored to have been recently awarded “Best of The Best” in local entertainment for 2021 by readers of the Shelbyville News Annual Readers Poll!

Contact Buck Rogers Jr., Hoosier Songwriter to book him at your next event!

Follow Buck Rogers' Events page to stay up to date on where he will be playing next!